Turning your music production dream project into a successful reality is an achievable goal!
Noizy Beez’ seasoned production team will get you there with marketplace-competitive results!

Song-sensibilities, production treatment, and capturing performances are the essence of a great music production team!

We have a full-service, experienced production team at Noizy Beez to work with you to achieve your music project vision!

Working alongside some of the most successful music producers ever in the music industry during 20+ years as an A-List session musician,B. James crafted a music production DNA that was acquired in the trenches.
The casting of musicians, background vocalists, programmers, tracking/mixing & mastering engineers is in and of itself,a bit of an art. These are some of the most impactful decisions a producer makes on behalf of an artist or a self contained band. We know this business well!

Great recording gear and studio environment are not the drivers, but rather the vehicle that takes your music performances where they are intended to go. We don’t believe it’s a wise investment to go the cut-rate-studio and inexperienced production team route. It’s YOUR music! Better to have a fully realized music project embedded with experience from the front lines, than empty pockets and so-so results!

Working in a song-town like Nashville, the evidence of song craftsmanship rarely takes a back seat to production value,
They are intimately connected. If the song is fleshed out in pre-production, your recording has a head start at being memorable. And successful!

“I believe one of the first questions a music producer should ask an artist is ‘what is your vision of what your music is, you know, who does your music appeal to, who is your audience?’ If an artist knows the answer to this granular question, the production process is an exciting journey with a clear runway to a desired outcome” B. James says.

One of B. James’ primary producer influences is Mutt Lange of AC/DC/Shania Twain/Def Leppard fame. Mutt’s philosophy of having many musical ‘hooks’ in your song craft & recording creates undeniable sonic ear candy.And that makes for an energetic and big sounding recording. Like background vocals (BGV’s), they can make your recording sonically panoramic when applied in the right context. BGV’s create that texture & secret sauce you hear on many timeless hit recordings” 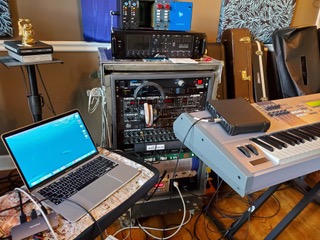 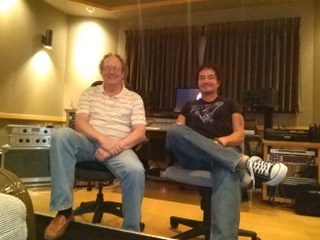 For you gear geeks, we use a large toolbox of analog outboard gear. Mic pre’s from API, BAE, Neve, and SSL. Mics of nearly every stripe. AVID PT & Logic Pro systems. UA Suite, Waves, Fab Filter & Sound Toys are a few go-to plug-ins we keep on hand as mixing tools. We also have an Adobe Premier Pro editing suite for Video.

We build a custom-tailored rate for larger projects of 3 songs or more. Our per song rate is an economically friendly custom rate fitted to your project requirements. Submit your inquiry with your details on the contact form! Here’s to your recording success!

5TM has entered into partnerships with Open Gate Entertainment and established tv Executive Producers on the RHYTHM REEL production and navigation team for streaming service distribution.